The activation of Regulus, Leo’s Little King, in the Birth Horoscope of Donald Trump, as he is diagnosed with the corona virus

Site for Astrology seekers and apprentices

Ask the Wild Bee what the Druids knew…

Lakshmi, Goddess of Wealth and Pleasure

Like most people around the globe I was shocked to hear the news of US President Donald Trump diagnosed with corona virus, after many months of downplaying the illness’ dangers and need for caution.

I looked again at Trump’s current transits and found some particularly telling aspects that I like to share with my readers. To make these transits more intelligible I am also adding, at the end, a link to an old article I published about the meaning of the star Regulus in the Astrology of Donald Trump, as it has become very relevant in the present circumstances.

An example from  my Regulus post: Guido Bonatti, a 13th century Italian mathematician, astronomer and astrologer, advisor of Frederick II, Holy Roman Emperor, wrote that this Star, when acting in a negative way, signifies that ‘the Native shall die an unhappy death; or at least that all his honors, greatness and power shall at last suffer an eclipse and set in a cloud‘. A very poetical description. Not my words, but those of an ancient scholar, long dead. Time will tell.

Here is Trump’s Birth Chart surrounded by the transits for Friday, October 2, 2.54 pm Washington time, when the president announced, via Twitter, that he and his wife’s have tested positive. Hope Hicks, the woman who allegedly passed the virus to them, tested positive the previous day, Thursday. Knowing this fact about his close associated, who traveled with him and his entourage for days previously, did not stop Trump going ahead with his campaign schedule in New Jersey and other places, until his own diagnosis, thus potentially infecting other people (see Regulus and hubris). 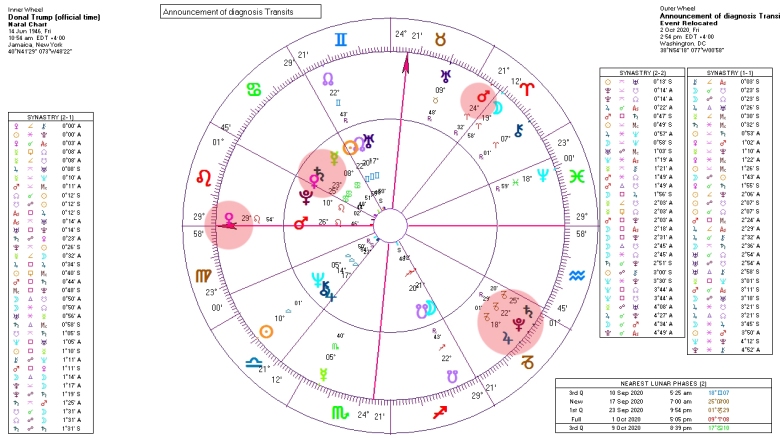 Donald Trump Transits at the time of corona virus diagnosis

The first thing that jump to the astrologer eye is the transiting Venus sitting on the same degree of Trump’s Ascendant as well of the star Regulus (the hubris star in the 29th degree of the Leo constellation), as this event unfolded. Venus meets this degree about once a year, a significant transit but not rare or usually life changing. Not this time though, due to other transits involving hard task master Saturn and the ultimate transformer, god of the underworld Pluto, to his natal Venus. In this scenario the quickly moving Venus in transit becomes the perfect catalyst for bigger, life changing cosmic events. To add to all this Retro Mars in Aries happens to be also connected with the transiting Venus (a trine, 120 degrees angle, adding to his natural vanity and misplaced self confidence) while in square (difficult 90 degrees angle) to all the Capricorn planets. At the same time transiting  Retro Mars in Aries is also squaring his natal  Cancer Venus and Saturn, transits that will conclude only at the end of 2020.

Venus represents women, young women in particular as glamorous Hope Hicks. Venus is a prominent planet in Trump’s Birth Chart being aligned to natal Saturn, and not connected to any other planet by a major aspect. This has made Venus, as symbol of women and also of pleasure and money,  a prominent but not well integrated energy in his psychological makeup, and therefore potentially problematic. He obviously likes women, pleasures and wealth, but this trifecta has also caused him a lot of trouble and could even become the cause of his downfall, due to the close alignment to Saturn. Saturn in fact represents karma, helping us grow through severe limitations and hard lessons.

Of course Venus transiting over his Ascendant is only one of numerous signatures for trouble that are currently active for Trump. I suspect, for instance, that an alignment between this same Venus and Trump’s fiery Mars in Leo may have marked the time he was infected, September 27 to 30, before the first presidential debate.

I add here a table with all the transits becoming exact between October 2 and 3.

The big ones however are the current transits of karmic Saturn in Capricorn just at this crucial time when he is seeking re-election, just separating from the opposition to his own position at birth and getting closer to an opposition to natal Venus on October 21! To aggravate this already difficult cosmic tale Jupiter and Pluto, also in Capricorn, are preparing to form an opposition to Trump’s Saturn too and, eventually, his Venus. And Jupiter, right now, is also square Jupiter’s own placement at birth, increasing Trump’s grandiosity and penchant to take risks. Please also notice the fact that the transiting Lunar Nodes (axis of destiny) were aligned to Trump’s natal Sun opposing natal Moon, just on October 2 (19 years cycle). These are all potentially life changing and difficult transits; not good news for him as they become active just during the presidential election period.

There is a lot more to tell about Trump’s astrology and I’ll hopefully write more extensively about this before and after the presidential elections. This post however has been mainly inspired by Venus aligning to Trump’s Ascendant and the star Regulus that was rising at the time of his birth. Here is a link to an earlier post I published about Trump and Regulus. Reading it will explain the connection not only to Trump’s personality and destiny but also to his current predicament.

For more on Trump Astrology please navigate to his dedicated page Here.