Margaret Olley Astrology: Reading of her Birth Chart and the Progressions-Transits active at the time of her death

On July 26, a month past her 88th birthday, Australian artist and philanthropist, Margaret Hannah Olley, has died at her home-studio in Sydney. Busy to the end she was preparing a solo exhibition of her latest works.

Her birth-time is not available, so I chose to work with the Chart of Sunrise on her birthday, June 24, 1923. The planetary picture of that sunrise reveals much of the kindness, eccentricity and irreverent spirit that have made her the darling not only of the art world but also of common Australian people. Following is a reading of Margaret Olley’s Sunrise Chart.

Margaret was born with the Sun in Cancer, Sign of caring and imagination, in love with old things and attached to the security of home life. Most of Olley’s paintings were still life captured within the walls of her home, that was also a studio to her.

No better dream for a Cancerian than to create a cocoon where one can feel familiar and safe, where the source of creativity is never far away. She had an eye for small things, what others may think irrelevant and common, and made them art.

Not having children of her own she mothered apparently a great number of people, young artists in particular, thus fulfilling her Cancerian urge to nurture. Her Mars was also in Cancer, in contact to Pluto and Saturn, facts that made her nurturing qualities more militant and assertive. She must have been rather bossy at times, a queen within her own comfort zone.

Pluto in Cancer, in the vicinity of Mars, provided her with unflinching determination and fight to the death attitude, making her a rather driven person (she had more than 90 solo exhibition during her long career); and one who held some tangible power in the difficult and highly competitive art world. Mars in conjunction to Pluto acquires Scorpionic qualities, and, at 90 degrees from Saturn, becomes tougher and more cynical, accounting for Olley’s famously outspoken and frank ways. A Scorpio Jupiter, planet of the philosophical and moral outlook, would have enhanced again her uncompromising, honest, cutting through crap attitude toward life. And strangely suggests her enduring legacy to the arts and the philosophy and ideals of art, legacy that is guaranteed to survive her physical demise (Scorpio). Mars was also in aspect to Uranus, planet of individuality, accounting for her eccentricity and fierce independence, as well as for her awareness of social issues and her reforming spirit.

Olley was known and loved for her sense of humor; there is often a comedian quality to the Cancer personality, as shown by the number of great comedians and whimsical artists born under this Sign, like Robin Williams, Cindy Lauper, Tom Hanks, Meryl Streep, Bill Cosby.

Her artistic inclination is easily spotted in the conjunction of Venus, planet of beauty and aesthetic feelings, with Mercury, planet of communication, in Gemini, Sign of manual dexterity and adaptability. The accent in Gemini also kept her thinking young, even in her old age, easily befriending people much younger than herself. It also guaranteed her sharp wit and communication skill that won easily over her natural shyness and desire for a retiring life (Cancer). Gemini can be very irreverent at times, even a bit juvenile. A harmonious angle of both Mercury and Venus to Saturn in Libra indicates that, despite the choice of a bohemian life, Margaret Olley enjoyed discipline and routine, and felt often a sense of duty about grounding her inspirations into finished products, Saturn adding a down to earth quality of this Chart. Coupled with Cancer, these Saturnine aspects would have contributed greatly to her business skills.

The all important Moon was transiting from Libra to Scorpio that day, so, without the birth time, we can only guess. Libra could fit her idealistic personality, desire for relationships, but also fussiness about them, aspiring perhaps to something that is very difficult to attain in real relationship, a feeling of perfect equality and fairness, hence the choice of remaining single.

A Libra Moon would also add to her artistic talents and love of beauty, flowers and hats. In her bohemian way she was always well dressed, in beautiful colours and materials, old fashion (Cancer) but also stylish (Libra). The Sun and Moon both in Cardinal Signs (Cancer, Libra) would have accentuated qualities of restlessness and ambition.

A Scorpio Moon, on the other hand, would have added more intensity and shrewdness, and also more sensitivity and an instinctive knowledge of human nature, the good and the bad. It would also have accentuated the possibility of going to emotional extremes, falling into addictions and depressive moods, also her lot in life. If the Moon was in Libra (birth before 10.20 am) her recurrent depressions could be easily accounted for by her difficult Mars-Pluto-Saturn interaction.

Of note, considering the sudden nature of her death, somewhat unexpected, on July 26, 2011, we can’t help to notice that the last Solar Eclipse, on the Cancer New Moon of July 1, was conjunct Margaret Olley’s Pluto, while Saturn was squaring Pluto and the Eclipse point, Uranus was in orb of square too, and Pluto in orb of opposition. The time had come.

Bon voyage, lovely Margaret, you made your mark to the last.

Here are the Progressions and Transits at the approximate time of death, worthy studying. 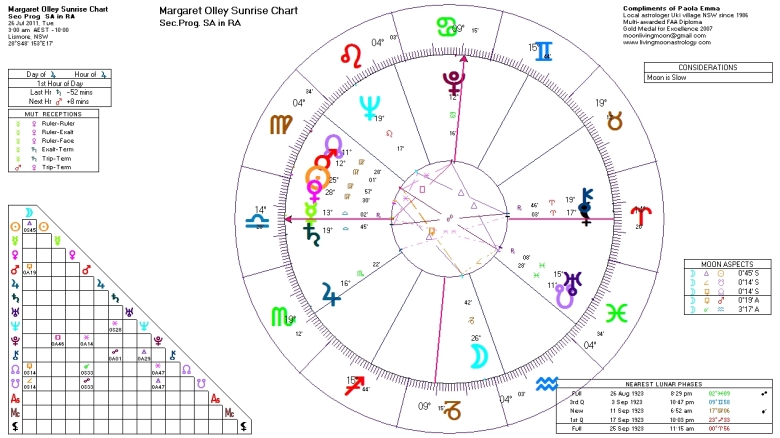 Margaret Olley Progressed Chart at the approx time of death 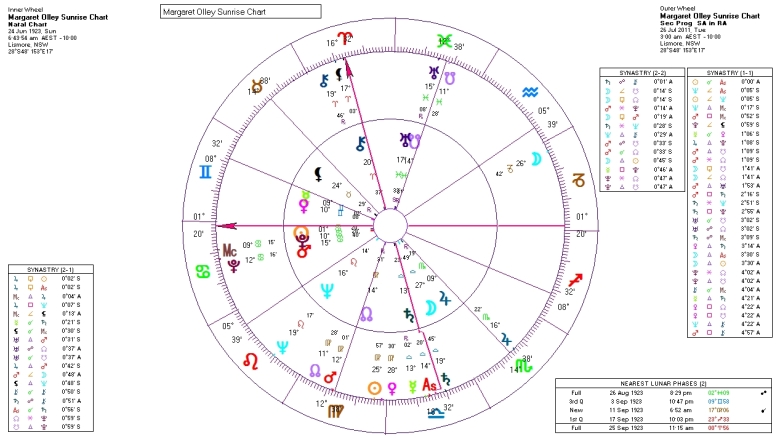 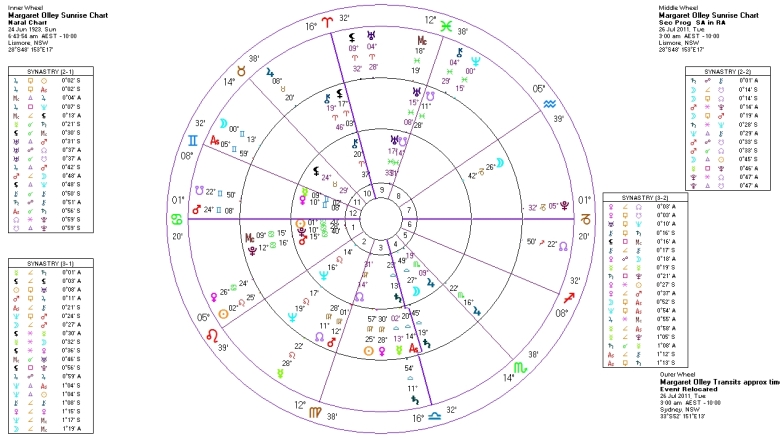