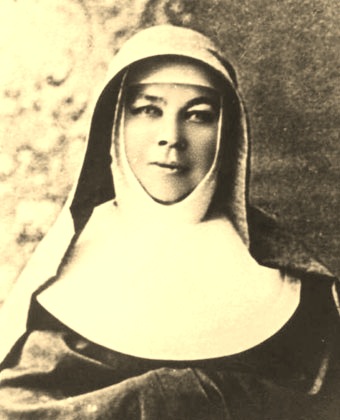 Photo courtesy of the Sisters of Saint Joseph, Penola

I published this post on the Astrology of Mary Mackillop on December 19 2009, the same day the pope declared her a Saint.
I am re-posting it now, with others I published in January 2019 and October 2010 (links below), to show the great potential of an evolved Aquarius/Pisces Moon cusp to contribute to the collective good. Like all Sun or Moon or Mercury Signs etc there are many levels of expression for each zodiacal placement and each planetary energy. In Mary Mackillop’s Birth Horoscope we can see a bright example of a life well spent, as she initiated positive cultural changes that are still very relevant today.

This intelligent teacher and nun, coming from a poor family of Scottish immigrants, will be the first person born on Australia soil to be recognized as a Saint and miracle maker, an important archetypal event, significant for all Australians, not just Australian Catholics.

There are many sites on the net that talk about Mary, giving detailed information about the most salient events in her life. Here are some:

Mary MacKillop’s was born on the 15th of January 1842 in Fitzroy, state of Victoria, Australia. Her time of birth is unknown, that’s why I have chosen to use the sunrise time for the day and place of her birth. It is very interesting to cast a chart of sunrise even when the time of birth of an individual is known because sunrise contains, in germ form, the destiny of every individual born on that day.
I have often derived much insight from the study of these sunrise horoscopes. To me they stand for those aspects of the individual’s life that connect it to the collective design of the Spirit; each degree of the Sun’s passage through the Ecliptic representing a ray of consciousness that will manifest, with different measure of brightness, in all individuals who begin their life journey on a particular day.

This is then Mary MacKillop’s Sunrise Chart, local time 4.59 am: 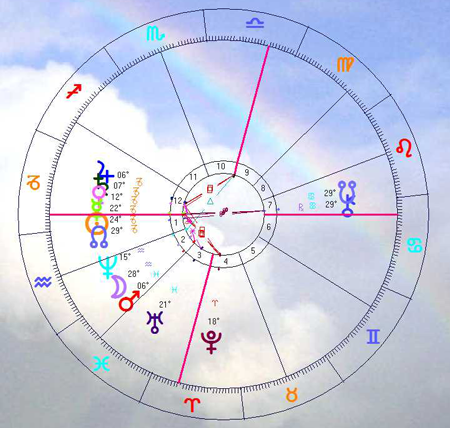 In this chart the Sun is in Capricorn and the Moon in Aquarius. It is however important to notice here that at 8.51 am the Moon entered the Sign of Pisces that day. Both Signs, Aquarius and Pisces can manifest in a personality given to feel for other people and naturally inclined to help. The fame of her compassion and claim to saintliness may suggest a Pisces Moon, compassionate, self-defacing and self-sacrificing; her chronic ill-health and love of animals could imply the same. While the fact that she contributed to the education of a great number of disadvantaged children by founding many schools in Australia rural communities and other countries would fit well the democratic vision and love of knowledge of an Aquarius Moon. Also her unconventional outlook and somewhat rebellious spirit that gained her the disapproval of the Catholic hierarchy of her time (she was excommunicated for a number of months in 1871) fits well the rebelliousness and independence of an Aquarius Moon.

I am quite happy then, without going to the trouble of rectifying her chart, to consider hers a cusp Aquarius-Pisces Moon.

The first obvious thing in this horoscope is the stellium (group of planets) in Capricorn, enhancing the practicality and hard-working tendencies of this remarkable woman, who displayed certainly strong leadership and organizing abilities, despite her humbleness.

All Cardinal Signs (Aries, Cancer, Libra, Capricorn) tend to display those qualities, each in its own special way; when it comes to Capricorn it is their ability to perform hard work and their ambitious goals that gain them respect and following. Capricorn and Cancer in particular often make excellent role models. The fact that so many planets, Mercury, Venus, Jupiter, Saturn, plus the Sun and North Node of the Moon, are all found in Capricorn shows a tremendous ability to focus, concentrating the practical and goal oriented qualities of Capricorn in a very effective, even extreme way.

This tendency toward extremism, even fanaticism, is indicated by the challenging right angle of some her Capricorn planets to Pluto, that, in the Sunrise horoscope resides in the ancestral sector, inclining her to break radically from the past. On the positive side this aspect indicated the deep wealth of resourcefulness she displayed and the strong will and determination that helped her to achieve some very ambitious goals, for a woman in that period in history, and a socially and economically disadvantaged one to boot. To confirm this Uranus was also in positive aspect to her Sun and Mercury, another proof of her unconventional outlook and strong individuality.

In the Sunrise Chart this rich conjunction is found in the Twelfth House, an appropriate position for a woman who decided very early in life to renounce the mundane world and to dedicate herself to God’s work. The twelfth sector of any horoscope in fact represents the area of experience through which, willing or not, we realize the futility of our ego desire and the impermanence of things, experiences that sometimes drive us to seek refuge in the spiritual dimension or in some form of escapism.

Another very interesting configuration in this Chart is the close conjunction of Jupiter to Saturn, often found in the horoscopes of people who succeed to make their dreams and aspirations (Jupiter) into living realities (Saturn), because they are driven by a vision and compelled to actualize it.

This conjunction may also point out Mary’s love and respect for her father (the one who took care of her education and religious instruction when she was growing up and supposedly inspired her to take up teaching) and perhaps to an excessive idealization of the man, and of older men in general. From her biography we learn how one reason why she decided to embrace the life of the cloister and her mission with the poor was her encounter with another father figure, Reverend Julian Tenison Woods, who became her instructor and mentor in the formative years before her Saturn’s return, at the age of thirty (around the time she was excommunicated by a Catholic bishop, for alleged insubordination).

Another interesting placement is that of the planet Neptune in Aquarius and in the Second House, the sector that has to do with our value system and also the way we are likely to derive an income. Neptune, planet of spirituality and renunciation, sits just on the cusp (the most sensitive point of every House) of Mary’s Values’ sector. This shows that the things she valued weren’t material possessions but belonged to the world of the Spirit. The best expression of this position of Neptune is a person born to give and ready to transmute the ego desires into selfless giving. The worst expression of the same is the tendency to be unrealistic and unpractical when it comes to money and possessions or even to rely on others for one’s own sustenance. By embracing the life of a nun Mary has manifested this aspect in an ideal way, by taking a vow of poverty and using her resources to help others in need, in particular the underdogs of the society she lived in.

To end this brief analysis of Mary MacKillop’s planetary positions I cannot overlook the role of Chiron in late Cancer, the only planet on the opposite hemisphere to the multiple conjunction in Capricorn. Chiron is in fact in opposition to her Sun and Mercury and perfectly conjunct the South Node of the Moon. This peculiar position helps this little planet acquire a greater importance in the interpretation of this Horoscope that it would otherwise have.

Looking at this Chart like one looks at a painting Chiron is like a splash of contrasting colour or a feature in an art work that continually shifts our visual attention from the main theme on the other side of the canvas.

Chiron in Cancer often shows a degree of frustration and a need for resignation in the area of nurturing. I found it sometimes in the Birth Charts of individuals, in particular women, who have suffered greatly through the inability of producing children or of properly nurturing or enjoying them. Like with all other Chiron’s position this is really an opportunity to utilize the apparent difficulty in order to gain greater awareness. Certainly Mary was able to sublimate her frustrated maternal instincts and inability to have children, due to her religious vow of chastity, in working all her life with children and for children. The conjunction Chiron-South Node of the Moon further exemplifies that her experience of chronic illness was a physical, perhaps hysterical expression of this inner conflict. The South Node always points out something that we need to relinquish, an experience or dimension of life that is part of the past, helping, at the unconscious level, to build the future (North Node), while, at the same time, in need to be forsaken in this life-time.

In the Sunrise Chart Chiron and the South Node are also found in the Relationship sector Seventh House), showing that close, one to one relationships have somehow to be renounced for the greater good, her work and the driven, all devouring ambition symbolized by the multiple conjunction in ambitious and workaholic Capricorn.

Finally the Chiron’s effect seems even more significant in the light of the miraculous cures that have been attributed to the intercession of Mary MacKillop, in life as well after her death, and that are the basis of her beatification. We cannot forget that Chiron is the wounded healer of archetypal legends, able to heal others while unable to offer a cure to himself, because the experience of suffering was central to his character and destiny.

Vega, the alpha star of Lyra, the Harp constellation, is conjunct Mary’s Venus, while Altair, the alpha star of Aquila, the Eagle, is conjunct her Mercury. Vega is traditionally said to add a strong charisma to the personality and conjunct Venus, the planet of femininity, gave Mary the power to attract that made her bossy temperament more fascinating and subtle. This is the instrument of Orpheus, the enchanter who was able to bridge the gap between the realms of life and death through the magic of his music. People influenced by Vega can be very persuasive and attract following.

Altair, on the other hand, is also a fortunate star, indicating the strength and courage to pursue one’s goals in life, and certainly Mary had plenty of that too. Because it is Mercury that is in contact with this powerful star the Eagle’s qualities would have influenced in particular her intellect and communication skills. According to Bernadette Brady through this star we are able to act quickly and decisively, seizing the moment, while its darker side can be aggression and forcefulness. With the Moon conjunct Mars, even from the delicate and non aggressive Sign of Pisces, Mary was a born militant, ready to fight for what she believed was right and God’s will. Mars in Pisces embodies remarkably well her power to act and be assertive when motivated by compassion and concern for human welfare and spirituality.

The Capricorn New Moon just prior to her birth (on January 12) coincided with a Solar Eclipse. During this eclipse the multiple conjunction in Capricorn had its heyday, enhancing the destiny making qualities of this rare configuration.

A look at this Eclipse will make this more clear. 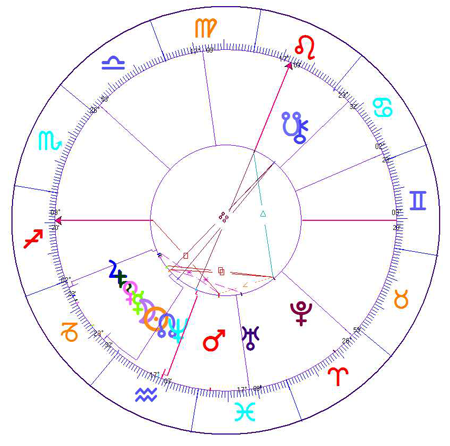 As you can see the Solar Fire program, used to generate this Chart, makes the glyph of the celestial bodies forming the mighty Capricorn conjunction to overlap one another, in order to fit them all in such a limited area of the Zodiac.

Even if some will doubt the veracity of her miracles no one would deny that this humble and socially disadvantaged woman was an amazing miracle worker and accomplished incredible feats of compassion that still live in her name today.

I have a lot more to say about Mary MacKillop’s Chart and the Transits and Progressions that constellated the major events in her life, and those that are still activating her horoscope today.