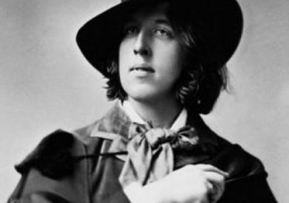 Talented Oscar Wilde was born when the Moon was transiting Leo and the Sun Libra. His Ascendant was Virgo and the Ruling Planet Mercury was in Scorpio squared by the Moon. He died on 30 November 1900, while in exile in Paris, three and half years after being freed from a London jail, where he spent two years for being Gay (from May 25 1895 to May 18 1897).

LEO, Moon of creativity and passion
Warm and fun loving

A note: the garden activities associated with the Moon Sign depend also on the cycle the Moon is in. The Moon transiting through a fertile or productive Sign will no be so favorable if the Phase is not a productive one, and vice-versa. For best results the Sign and Phase of the Moon have to be considered together.

The New Moon is the beginning of the Waxing cycle, the sacred marriage of Moon and Sun, Yin and Yang, Night and Day. For three days the Moon becomes invisible. Astrologically we say that the Moon is now conjunct the Sun (on the same degree of Longitude along the Ecliptic). Every month the New Moon occurs in a different Sign. So the Aries New Moon in March/April is always followed by the Taurus New Moon in April/May and so on. New Moons are symbols of new beginning and represent a great time to start something or make important changes in our lives. The energy is right for everything new you would like to try.

The Crescent Moon occurs half way through the first week of the Waxing cycle, when the Moon is transiting 45 degrees ahead of the Sun and looks like a beautiful crescent in the western sky after sunset. Psychologically this is an enthusiastic time, in which lots of ideas crowd our mind and we may feel that the sky is the limit. It is a slightly naïve Moon time, but also one full of hopes and dreams (the bright crescent shows now the shadowy sphere of the future Full Moon. The energy of the Moon however needs maturing at this stage and grounding. The first difficulties may appear, the first chinks in the armor; but the challenge is not strong enough yet for us to build up on it.