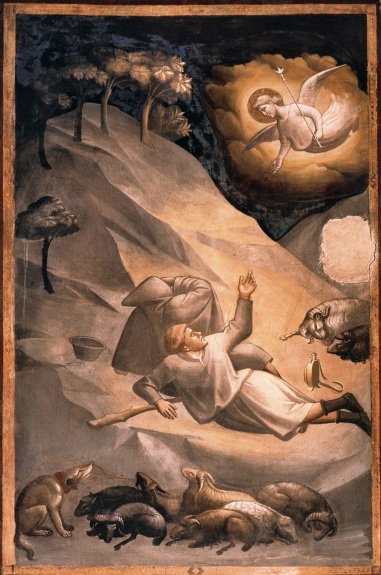 14th-century fresco by Taddeo Gaddi, Basilica of Santa Croce, Florence – Angel announcing the birth of Jesus to shepherds during an eclipse

The last Eclipse season for 2018 ends here, with a New Moon in Leo. Time in Eastern Australia will be 7.57 pm and therefore the event will be observable exclusively from locations in the Northern Hemisphere.

The New Moon nature of a Solar Eclipse signifies that this ending is then also a beginning. It promises significant turning points and great insights from the heart, for many people. These developments may seem slow to manifest, due to the present multiple Retrogradations and also the slow acting nature of Eclipses, but they are guaranteed in their profound effect on our collective psyche.

Look, for instance, at this fresco by the old Florentine master Taddeo Gaddi (1290-1366) in which he associated a Solar Eclipse to the greatest event he, in his faith, could imagine: the birth of the Christian Savior. Many other artists, past and present, have linked Eclipses instead to the death of Christ, or other exceptional events, believing that Eclipses somehow contribute to alter the consciousness of our planet.

The Eclipse effect is not only a valid symbol of transformation in Art, or just an old religious superstition, but it has been corroborated by many historical events and personal experiences. Eclipses are important for the world collectively and for many people personally.

Please scroll to the bottom of the page to check the Horoscope of this Solar Eclipse.

If, in your Birth Horoscope, the 17th, 18th or 19th degree of any Sign is tenanted by a planet or any of the four Angles this Eclipse will be close and personal to you. The Signs more directly affected will be Leo, of course, with Aquarius, Taurus and Scorpio.

The Solar Eclipse is in Leo, Sign of fire, passion and the heart of things. Time to reawaken those in our lives, beginning a new phase of creativity, of loving what we do, loving more warmly whom we love, giving more of ourselves, being more generous with our time and energy, expressing more spontaneously all that we are, coming from the heart and not the head.

As I’ve often remarked, Eclipses are not isolated phenomena. Like all other Transits they occur in unison with other cosmic configurations and it is often these that contribute to the character of the Eclipse itself. In this instance, as in the recent Aquarius Lunar Eclipse of July 28, Uranus is prominent, being in fairly close 90 degrees angle to the Lunar Nodes. At the same time two other Trans-Saturn Planets, Neptune and Pluto, are linked to both Sun and Moon, during the Solar Eclipse, by a 150° aspect (Quincunx or Inconjunct), in a configuration known to astrologers as ‘Finger of Fate’ or ‘Finger of God’.

Something the outer Planets have in common is their power to change us and the world in profound and irreversible ways. They represent the evolutionary drive urging us toward a more conscious living.

Most important of all is Uranus’ role in all of this. This Planet represents the drive to individuation, the democratic, open minded, unbiased spirit helping us search for greater equality and justice, embracing reforms that ultimately will improve life for everyone. Since Uranus’ discovery, at the end of the 18th century, these concepts became integral to our modern democracies, and, through leaps and bounds, we have been struggling to make them a reality. A solar Eclipse with a prominent Uranus should bring these ideals to the fore, but we will indeed struggle to uphold them in the present world situation where reactionary forces are on the raise. The Squares of Uranus to the Lunar Nodes are symbols of these difficulties, due to the Fixed Signs’ natural resistance to change coupled with the opposite Uranus’ unsettling tendency to accelerate changes, bringing the new in sudden spurts of energy.

If the Eclipse degree (18° of the Fixed Signs) or the degrees of Uranus and the Nodes (between the second and sixth degrees also of the Fixed Signs) are aligned to Sun/Moon/Planets/Angles of your Birth Horoscope there will be a personal struggle in your life between the forces of progress and the forces of reaction and stagnation. Hopefully the struggle will make you stronger and more determined to overcome whatever is keeping you from advancing on your evolutionary path.

The configuration of the Eclipse degree (18 Leo) with Neptune in Pisces and Pluto in Capricorn is another proof that this cosmic event will have important repercussions on the collective psyche for a long time to come, sowing the seeds for some evolutionary quantum leaps for our world. First however we will have, as a collective, to abandon some cherished illusions about our civilization and humanity, looking honestly into the dark underbelly of our technological progress which we have gained at such grave cost to the natural world.

The Asteroid Pallas Athena is also aligned to this Solar Eclipse. She is a symbol of feminine strength, creativity, resourcefulness and wisdom, badly needed qualities in our war scarred world.