This post has been edited a couple of times since publication. I got a good excuse, Mercury is Retrograde in my Ninth House of Publishing!

A Grand Trine happens when two or more planets orbiting at a distance of 120 degrees from each other (from Earth’s standpoint) happen to be at the same distance from another planet or planets. If we were to trace these distances with an imaginary line, they would form an equilateral triangle.

The date of this complex event is March 15, 2012, but its effect could be easily felt one week before and after the actual time of exactness.

This is an entry on the Grand Trine in my summary of aspects configurations in my Astrological Tutorial on Aspects Page:

This is traditionally a beneficial aspect, indicating potential talents and opportunities. But the study of numerous Charts and dramatic events in history led many astrologers, ancient and modern alike, to believe that there is more to the Grand Trine than mere blessing or joy. This beautiful configuration can sometimes be inauspicious too, exaggerating perhaps the positive influences to the point of self inflation; or expressing them in a climax type of atmosphere that entails some danger.

Possible effects of Trines (and Grand Trines) in the four different Elements:

The degrees occupied by the planets when this configuration becomes exact determine who will be more likely to come under its spell. This Grand Trine happens on the tenth degree of the Earth Signs of Taurus (Venus and Jupiter), Virgo (Retro Mars) and Capricorn (Pluto). You could feel the Grand Trine more personally if your Sun, Moon, any Planet, Lunar Node or Angle (Ascendant, Descendant, Mid-Heaven, Lower-Heaven) happen to be on the tenth degree of these Signs or within two/three degrees either way of it.

The Birthdays directly aligned with this Grand Trine will be: Taurus born April 27 to May 1; Cancer born June 29 to July 3; Virgo born August 30 to September 3; Scorpio born October 30 to November 3; Capricorn born December 29 to January 2; and Pisces born February 26 to March 2. And, of course, anyone born within few days of the exact trines (approximately March 12 to 19).

The Planets involved instead determine which psychic functions have been activated by the configuration. In this case we have a complex blend of Venus (cooperation, attraction, creativity), Mars (assertion, action, courage), Jupiter (expansion, faith, search for meaning) and Pluto (transformation, depth, personal power), the overall dynamic of the configuration. You can see then that this could indeed be a very powerful configuration, generating energy for all sorts of projects and ventures, giving a boost to our social life, personal relationships, study, career, business, and, most importantly, giving all a real opportunity to change the perception we usually have about love, work, the way we tackle difficulties and confront obstacles. Pluto’s presence always implying an intense desire to change things in a radical way, getting rid of all that do not work anymore for us, to be more truthful with ourselves and others, even if it hurts; while Jupiter adds the personal confidence and faith in better things to come, attitudes that can greatly help to face difficulties.  We could become, during this period (lasting a week or so) more resourceful, energetic and brave, feeling empowered to act by the difficulties we are facing rather than be passively overwhelmed by them.  As I described it in a recent post on Venus’ Transit through Taurus, this configuration could encourage, in many of us, a ‘renewal of confidence in self and life’.

I can add here that we could all feel life more passionately and intensely, getting more out of our experiences, more depth of understanding, more meaning and a sense of our destiny unfolding. To decide which areas of your life could be more likely affected by these transits you should look at the House positions of the four planets relative to your Birth Chart.

To know what personal effect these transits and others are having on your life, past, present and future, you may want to book a reading-consultation with me. I am available in person, by phone or Skype. Click my Astrological Consultations Page for details, HERE.

For everyone the fact that these trines occur in an Earth-Fixed Sign means that the opportunities will be very real, not just fanciful feelings or far fetched ideals, encouraging a practical and realistic take on life, making things really happen for us, if we are able to use wisely the gift of this rare configuration.

While it is true that Grand Trines can prove very beneficial, increasing the potential for expressing in creative and fulfilling ways the Element they are in, in this case Earth (practicality, sensuality, realism, efficiency), studies done by many serious astrologers have also revealed their potential for negative expression. This seems to be mainly due to their close circuit nature, where the planetary energies bounce from one another, keeping on moving in circles, so to speak, without achieving much, while creating feeling of self-inflation or excessive optimism.

Of course we should not forget also that, at the same time, Mercury has started his Retrograde period (becoming Stationary on March 12), now moving backward into Aries, while Mars is still Retrograde in Virgo. These facts will tend to slow down the pace of progress for everyone, forcing us to repeat experiences and face challenges we may have thought to have left behind.

Talking about retrogradation I have to apologize for an error (now corrected) in my previous post on the magnificent visual conjunction Venus-Jupiter (exact on March 15) where I stated that Jupiter was Retrograded at this time. He is not, while Mars and Mercury are. A Retro Mercury’s trick?

Below is a Chart calculated for the moment Mars trines Pluto, using my local coordinates of Wollumbin in the Northern Rivers region of New South Wales, Australia. At this time Venus and Jupiter are separated from their respective trines to Mars and Pluto by only a few minutes in longitude. To convert the time of this Horoscope to your own time, please visit the World Clock site HERE. 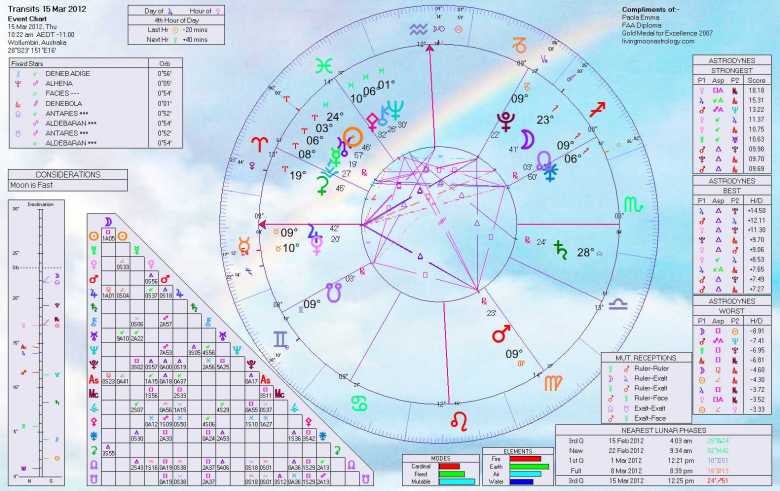 « Watch out for the magnificent conjunction Venus-Jupiter, March 2012
Celebrating Venus in Taurus: the myth of Europa and the Bull who was Zeus »