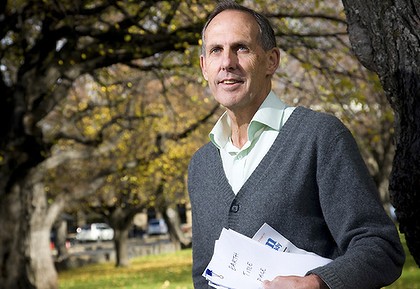 The electoral results are not painting a clear picture yet (transiting Sun opposition Neptune-Chiron between August 20 and 22), while revealing a greater number of dissatisfied votes against Labor that was even predicted. Amidst the general confusion Bob Brown is happy at the swing in the Greens’ favor that have characterized this election Australia-wide.

The Greens and a few Independents are set to hold the balance of power in our next Parliament. His party has also secured nine seats in the Upper House, an unprecedented number that will give the Greens a lot of clout in decision and law making, but not before July 2011 when the new Senate will be  officially sworn in.

Prior to the elections I had outlined a brief astro-biographical portrait of Bob Brown to be posted together with the readings of the other two major players, Julia Gillard and Tony Abbott. In the end however I became so interested in his Chart, including some significant progressions and transits that have constellated his career to the present day, that the initial post became a lot longer. That’s why I manage to publish it only now in installments. This is the first one, mainly concerning the significance of his Sun in Capricorn.

Fortunately we have Bob Brown’s birth time; we also know he is a twin, with sister Jan.

The salient aspects of this Natal Chart are:

Sun in Capricorn, IX House, Moon in Gemini (II House), Taurus Ascendant, Ruling Planet Venus in Aquarius in the Career House. Major aspects: Sun opposition Saturn, both square Neptune and Chiron; Moon conjunct Uranus, both trine Neptune and the Mid-Heaven; Mercury conjunct Mars in Sagittarius square Jupiter in Virgo; Jupiter in Virgo conjunct Chiron in Libra; Chiron conjunct Neptune in Libra; and the aspects he shares with his generation (born 1944) of Uranus in Gemini trine Neptune in Libra and sextile Pluto in Leo, Neptune and Pluto being also sextile to each other. Pluto is angular in the Fourth House and Venus is angular in the Tenth House.

In my eyes Bob Brown’s Birth Chart portrays faithfully his character and destiny, more obviously perhaps than many other Charts of famous people I have studied. Observing Astrology at work in such an amazing way is always very rewarding.

In Brown’s biography by James Norman we learn that he received a very conventional upbringing in a rather conservative rural family with a tradition in the police force (his dad was a cop and so have been, at different times, two brothers, his twin sister and four uncles!). The conservative and rather restrictive family life is well described by the Capricorn Sun in opposition to Saturn in Cancer, the latter always manifesting as deep disquiet in early upbringing, when one is not given the right kind of nurture or may be forced to repress his true feelings because they are not considered ‘proper’. As a child and young adult he apparently suffered severe bouts of depression, with occasional thoughts of suicide. Not a surprise with such an opposition complicated by a Sun-Saturn square to Neptune, the latter adding a sense of dissatisfaction with a purely materialistic life, and a confused sense of identity, due to his need to belong (Saturn in Cancer) and to rely on family and society’s traditions (Capricorn) and his sense of being ‘different’, because of his radical views and particularly his homosexuality (see Venus in Aquarius and Moon conjunct Uranus in Gemini). Such a T square could affect very much the person’s self-esteem (Sun) and make him into a bit of a serious and, at times, negative thinker (Saturn in the Mercurial III House and Neptune in the self-critical VI House). He admitted to have been, quote: “…a bit of a deep thinker all the way through…. I think I could have been quite difficult to fathom as a youngster, this kid who didn’t talk about himself very much.”

On the other hand any contact Sun-Saturn guarantees that there will be, more or less conscious, a driving ambition that could lead the person far, especially in this case when Cardinal, ambitious and goal-oriented Signs are involved (Capricorn and Cancer).

Bob Brown was a brilliant student (Sun in the IX House and Saturn in the III House, both sectors having to do with learning). The Sun in the IX House of higher learning and philosophy promises success in these areas and also a conscious sense of one’s own destiny, of being on a quest (the ancient used to call the IX House the House of God). Many of his followers consider Bob Brown a sort of environmental guru. he gained this reputation in 1982/83 when he succeeded to motivate Tasmanians to put up a fight in order to save the Franklin River wilderness from a huge hydroelectric project.  This Sun House position also inclines one to long distance travel and Bob Brown has traveled extensively, even working and living abroad at periods, creating international links with Green reformers all over the world. This is also the House of publishing and Bob Brown has had many books published since ‘Wild Rivers’ in 1983.

Saturn in the III House of basic learning made him a hard-working and dedicated student, always striving to do better. He became perhaps an over-achiever in order to compensate for his personal feelings of inadequacy (Sun opposition Saturn square Neptune) and a sense of alienation from his family (Moon conjunct Uranus).

Both Sun and Saturn, on opposite sides of the wheel, are 90 degrees away from Neptune in Libra. These types of aspects are more often than not sign that an inner conflict is raging between differing sides of the personality. In this case Sun and Saturn incline him toward a practical, realistic, no-nonsense outlook, heavily conditioned by his early environment (it is often a lifetime task for a Capricorn Sun person to outgrow these), while their squares to Neptune stand for another, very different side, often at great odds with the previous one. Neptune embodies our spiritual ideals and the human capacity to commune with the divine. This is the planet of compassion and of the merging of the individual personality with the soul of the world. Now this need for inclusiveness is very much at odds with Capricorn’s pragmatic views and its need to make a practical impact on his environment.

The Neptune person is a dreamer, a poet, a mystic, often ineffectual in things pertaining to the ‘real’ world (in his biography we find that he was considered, quote: ‘the family dreamer, spending hours wandering the paddocks and the bush surrounding the family home‘)’. At the same time the Capricorn person is a natural achiever and fundamentally a staunch realist. He seems to have managed to solve the tension created by these different needs and drives, by blending his environmental ideals (which are basically religious and missionary in nature) with his strong drive to make them into viable possibilities (Earth Sign and Saturn prominent), certainly with the help of courageous and rebellious Mercury conjunct Mars in fiery Sagittarius and the eccentric Gemini Moon conjunct Uranus.

The Sign placement (Libra), House position (cusp of VI House) and major aspects of Neptune (square Sun-Saturn, trine Moon-Uranus and Mid-Heaven) speak clearly of his need for a job that can fulfill his ideals and spiritual leanings (VI House), giving them a practical outlet (Sun in Capricorn, Saturn in Cancer) and also bringing out the less conventional aspects of his personality (Moon-Uranus conjunct in Gemini).

One Response to “LAST BUT NOT LEAST, BOB BROWN, AUSTRALIAN GREENS’ LEADER”