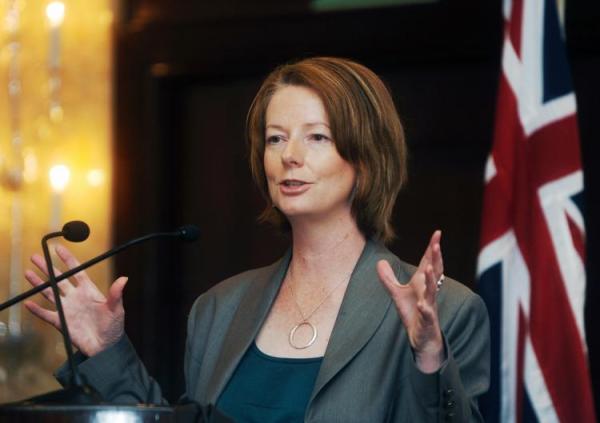 Many Australians are curious about Julia Gillard, astrologers included. After working diligently in the shadow of our former Prime Minister Kevin Rudd, without attracting undue attention to herself  (in true Virgo fashion, read below) she has now instead chosen to take front stage. With the Federal Elections looming close (August 21 2010) and the recent dramatic changes in the Labor Party’s leadership, it is interesting to look at the astrological portrait of the woman who has taken up the challenge in these difficult political and economic times.

The following is not an attempt to predict if Labor will win the elections, but rather an astrologically educated guess about this lady character and the planetary environment she is moving through at the present time.

Julia’s time of birth is, at the moment, unknown. This is a handicap for astrologers, because the time provides us with the basic orientation of the Chart and the all important Rising Sign, symbol of the early experiences that shaped the individual’s psychology and outlook on life, and also her physical temperament. A fairly good reading of a Birth Chart can be done however without the time, relying on the positions of Sun, Moon and Planets on the sunrise of the day of birth. This is the method I adopted in this case. 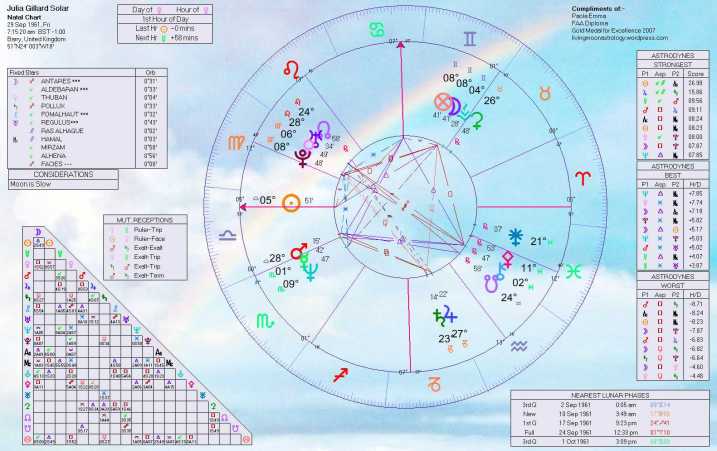 In Gillard’s Sunrise Chart Sun and Mars are in Libra, an astrological confirmation of her gift for diplomacy, her desire to cooperate with others and natural refinement. Librans make the best mediators, as they are ready to find the middle ground in any situation (remember she has been the Minister for Workplace Relations and formally an industrial lawyer). The downturn of these placements is the tendency to compromise too much at times,  in order to achieve peace and agreement at every cost. Other factors in this Horoscope, in particular the emphasis on Scorpio, will help to curb the more indecisive and wishy-washy traits sometimes displayed by Librans.

Because of the Libra emphasis Venus, Libra’s Ruling Planet, acquires great importance in her life and character. Venus was in Virgo at the time of her birth, accounting for her perfectionism and practical logic, a genuine desire to serve and lead a useful life, and also a natural modesty that could incline her to shy away from the limelight and also from public scrutiny. Venus in Virgo makes her a matter of fact and no-nonsense type, also readily critical and with a keen analytical sense that would have helped Julia in her study and career.

One aspect that changes the colour of Venus quite a lot is the close conjunction to Pluto, making her more resourceful and more inclined to seek positions of power and control, despite the natural Virgonian timidity (some astrologers suggested that she may even have the Ascendant in Virgo, because of  her physical appearance).  To add to these more resilient and assertive traits Mercury, Ruling Planet of Virgo, is found in Scorpio, Pluto’s Sign, indicating a shrewd mind and the will to carry on with her agenda, sometimes in overt ways, and even against fierce opposition. In this Water Sign of Scorpio Mercury, planet of the intellect and communication,  greatly increases her intuition. Despite all her pragmatism (Earth Signs strong) she is not relying on reason and logic alone.

No other Sign can boast the resolve and depth of Scorpio or the desire of Pluto to be in control. We should not forget that Mercury in Scorpio influences also the Moon in Gemini, because this Air Sign, like the Earth Sign of Virgo, comes under the tutelage of Mercury. Furthermore, if the above wasn’t enough, the Moon herself is in close contact to Pluto in Virgo (square or 90 degrees angle), adding depth of emotional understanding and even stronger Plutonian traits, very useful for a person who seek to hold positions of power, also however making her more prone to get entangled in serious power struggles and to attract severe opposition at times.

The Moon is in Gemini, another Air Signs (the best in the area of communication and social graces) confirms her wit, inquisitive mind, adaptability, mental flexibility and multi-tasking ability. Gemini is also the Sign of learning, so it is not surprise that she is interested in the improvement of Australian education standards. She talks more slowly than one expects a Moon in Gemini person to do, suggesting the prominence of Capricorn (Jupiter-Saturn) and Scorpio (Mercury and the numerous aspect to Pluto). Gemini represents the lighter traits of her character, her sense of humour and ability to see the funny side of things. She is emotionally independent and would resent too tight and binding relationships. This Moon could account for her choice of not getting married.

At the time of her birth Jupiter and Saturn, the giant Time Keepers of our Solar System, were conjunct in the Sign of leadership, ambition and hard work, Capricorn, a 20 years events, and an aspect under which leaders and important figures are often born (see Obama’s Birth Chart, born just a couple of months earlier, with Jupiter conjunct Saturn on the cusp Capricorn-Aquarius). Under this transit one pursues aspirations (Jupiter) with tenacity and self-discipline. Progress is proverbially slow but sure. The conjunction denotes a person with conservative values, perhaps too cautious at times, Saturn (caution) being stronger in Capricorn than Jupiter (confidence, hope).

A near perfect harmonious angle between Mars and Uranus fortunately injects some passion for innovations and changes, a bit of a revolutionary streak, but all in good taste (Mars in Libra), and a certain defiance of authority, with the ability to conceive original, innovative ideas, despite her generally conservative views;  also a bit of an autocratic streak. There is also an honest desire to help and love of people as can be deduced by the harmonious angle between Venus, the Goddess of personal love, and Neptune, the God of universal love and compassion. So Julia Gillard is personally investing a lot of her love-energy  into collective channels. She loves (Venus) to help the needy masses  and feels genuinely sorry for them (Neptune). But she is, first and foremost, a realist and a diplomatic person, so she will have to achieve her dream within the boundaries of the possible, and perhaps the ordinary. The planetary contacts of all the trans-Saturnians  with her personal planets (Venus conjunct Pluto; Moon square Pluto; Venus sextile Neptune; Mars sextile Uranus) will ensure her  openness to the varied and especially the less conservative cultural currents of our times.

There is an apparent lack of the Fire element that could account for the fact that Julia Gillard seems to find it hard to be just spontaneous, but tries always to remain in control, due to the strength of Capricorn, Virgo and Scorpio in her Chart. This trait could make her less appealing to the public, but does not derives, I feel, from lack of warmth or sincerity, rather from an innate shyness and sense of propriety. Because the time of birth is not known, there may be a Fire Sign on her Ascendant, so it is too early to pass judgement. A fiery Ascendant could in fact explain many things about her and her raise to power, including her red hair!

Julia Gillard became Prime Minister on June 24 2010, after a sudden, and controversial, leadership challenge that favoured her ascension to the post. The most exact transit on that day for her was an opposition of transiting Neptune in Aquarius to her Birth Uranus in Leo, indicating she has been struggling with her desire to merge with others and be part of a group (Neptune) and her more independent and self-sufficient inclinations (Uranus). On the same day transiting Mars in Virgo was also conjunct her Birth Pluto, indicating strong challenges ahead and fierce opposition. In a recent interview she described this campaign as the fight of her life. Her Astrology certainly confirms this. Part of her will relish the challenge very much (Scorpio, Pluto, Capricorn), while her amicable Libran traits would perhaps wish to do without it.

I will provide more details about the major transits and progressions active for Julia Gillard during this electoral campaign in another post, also pointing out the numerous connections of her Birth Chart to Australia own Birth Chaart. I just want to observe here that Venus, the all important Ruler of Julia’s Mars and Sun Signs, has nearly ended her transit through Virgo and will enter our Prime Minister’s own Sign of Libra on August 7, perhaps a symbol of an easier and fairer ride for her in this campaign in the near future.

If interested please follow my next posts on the upcoming elections. These will also include analysis of the Birth Charts of the other two major players: Liberal leader Tony Abbott (Sun in Scorpio, Moon in Aries) and Greens’ leader Bob Brown (Sun in Capricorn, Moon in Gemini, like Gillard, and Ascendant in Taurus). ‘Til then, enjoy your transits!